Copyright: © 2017 Tanikawa M, et al. This is an open-access article distributed under the terms of the Creative Commons Attribution License, which permits unrestricted use, distribution, and reproduction in any medium, provided the original author and source are credited.

Introduction: Septic osteomyelitis commonly occurs hematogenously in either end of tubular bones in children. As involvement of patella among non-tubular bones is extremely rare, adequate diagnosis could be challenging. Although most of pediatric osteomyelitis can be treated with antibiotic therapy alone, the necessity of surgical treatment in patellar osteomyelitis is not known. We hereby reported a 9-year-old girl with septic osteomyelitis of the patella caused by methicillin-susceptible Staphylococcus aureus.

Case Report: Four days prior to admission, she had left knee pain after her gymnastic class. Two days after, she received acupuncture, but the pain did not resolve. As she developed high fever, she was referred to our hospital for further management. Physical examination revealed knee tenderness in front and absence of patellar floating. Initially, septic arthritis was suspected and joint fluid was aspirated. It was negative for gram staining with mildly elevated leukocytosis. Next day, magnetic resonance imaging revealed patellar osteomyelitis with periosteal abscess extending to patellar tendon. Blood culture and aspirated pus grew methicillin-susceptible Staphylococcal aureus. Because of persistent bacteremia, she underwent debridement and drainage. After removing the bursa and curettage of necrotic tissue of patella, a cavity defect remained from under the periosteum to the patellar tendon, where the abscess was drained. Soon after surgery, bacteremia was resolved. She was treated with cefazolin followed by cephalexin for 6 weeks as acute bacterial osteomyelitis.

Conclusion: Development of vascular system in patella progresses between 5 and 12 years of age and regresses afterwards. During this period, patellar osteomyelitis should be considered in differential diagnosis. Careful physical examination and imaging study are helpful in distinguishing patellar osteomyelitis from other common pediatric diseases of knee. While the majority of childhood septic osteomyelitis can be treated with antibiotics medically, our case and cases in literature suggested that patellar osteomyelitis often required surgical intervention.

Septic osteomyelitis occurs commonly in tubular bones hematogenously among children [1]. Growth plate located in both ends of tubular bones has rich blood supply from nutrient arteries forming vascular loops in the metaphysis. Blood-borne bacteria typically traps in the loops and develops focal osteomyelitis [2]. During childhood, avascular growth plate usually blocks subsequent invasion longitudinally, therefore horizontal spreads inside of growth plate often results in formation of periosteal abscess due to fragile periosteum in children [2]. Occasionally, non-tubular bones are also involved hematogenously in cuboidal, vertebral and pelvic bones, however septic osteomyelitis in patella is extremely rare in children [3,4]. On the other hand, septic arthritis in knee joint is not rare and they present with same knee swelling and pain, which may be difficult to differentiate clinically from patellar osteomyelitis [5]. While major joints of septic arthritis in children usually requires different treatment strategy including surgical drainage and enough normal saline lavage in addition to antibiotic therapy, most of pediatric osteomyelitis can be treated medically with antibiotic therapy alone [6]. However the necessity of surgical treatment in patellar osteomyelitis is not known yet.

We hereby reported a pediatric case with initial presumptive diagnosis of septic arthritis of knee joint, which turned out to be septic patellar osteomyelitis. Additionally, we considered the surgical procedure for osteomyelitis of the patella based on clinical course and literature review.

She was previously a healthy 9-year-old girl. Four days prior to admission, she complained left knee pain after her gymnastic class. As she had difficulty in walking, she was seen by orthopedic surgeon at clinic. X-ray revealed no bone fracture and she was sent home. Her knee pain was continued and she remained afebrile. Two days prior to admission, she received acupuncture for her knee pain, which was gradually worsened. On the day of admission, she became febrile and referral was made to our hospital for possible septic arthritis of left knee. Her 5-year-old sibling had common cold with fever 1 week before, but she denied any upper respiratory symptoms. She was never vaccinated in accordance with her parents’ vaccine hesitancy.

She looked agonized, but alert. Physical examination was unremarkable except swelling, local heat and tenderness at left knee. Tenderness was the worst on left patella, but no tenderness was noted at lateral and back sides of left knee joint. Left knee joint pain was noted at extended position and it was restricted for bending up to 30°. Patellar floating was not observed. She had no skin injury.

Cefazolin at 120 mg/kg/day and vancomycin at 60 mg/kg/day were empirically started for possible septic knee arthritis. Joint fluid culture was negative, but 2 sets of blood culture grew methicillin-susceptible Staphylococcal aureus (MSSA) at 14 h. Next day, magnetic resonance imaging was performed that left patellar osteomyelitis was detected with periosteal abscess at front side of the patella to patellar tendon (Figure 1). The abscess was aspirated by needle, which also grew MSSA. Later, MSSA was tested for Panton Valentine leukocidin (PVL) and toxic shock syndrome toxin-1 (TSST-1) by PCR, which were negative and positive, respectively. After bacterial species and susceptibility were revealed on day 3 of admission, vancomycin was discontinued. As she continued to be febrile and her blood culture remained positive at day 4 of admission with adequate antibiotic treatment, she was taken to an operating room for surgical lavage and debridement of abscess and patellar sequestrum. There were no findings of prepatellar bursitis. After the necrosis tissue under the bursa was curetted, a fistula was found from under the periosteal to the cortex of patellar tendon (Figure 2). 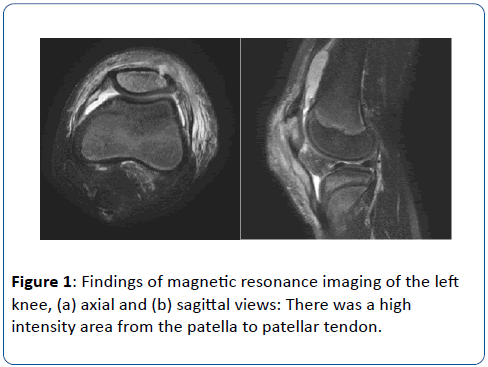 Figure 1: Findings of magnetic resonance imaging of the left knee, (a) axial and (b) sagittal views: There was a high intensity area from the patella to patellar tendon. Figure 2: Operative findings: After removal of the bursa and curettage of the bony lesion of the patella, a cavity defect remained from under the periosteum to the cortex of patellar tendon, where the abscess was drained.

Her blood culture became negative at day 5 of admission and fever was resolved. At day 17 of admission, antibiotic was switched to oral cephalexin at 100 mg/kg/day. She had a course of rehabilitation with crutches and discharged home at day 25 of admission. As her bony infection had debridement completely, she was treated as acute osteomyelitis with total of 6 weeks antibiotic treatment. Nine months after the treatment, she was free of relapse and short-term sequelae.

Patellar osteomyelitis in children is rare that only few cases were reported [3,4,7-9]. Patella is consist of small ossification center and large growth cartilage during early childhood. Patella has limited feeding arteries up to 5 year of age, therefore hematogenous osteomyelitis seldom occurs in this period. Development of vascular system in patella progresses after 5 year of age to 12 year of age that growth cartilage turns into bony component. During this period, chance of hematogenous osteomyelitis exists. However, several points make patella resistant to bacterial infection [7,9]. First, main artery enters from center of patella at front side into ossification center, which does not form the vascular loop seen in tubular bones in children. Vascular loop is considered as risk for bacterial trapping. Second, patella has rich arterial network enabled to deliver immune cells in the case of infection. Third, volume of medullary cavity is less in patella, that space for bacterial growth is limited. Once ossification of growth cartilage is completed around age of 12, vascular system of patella regresses and hematogenous osteomyelitis seldom occurs again. In our case, age of 9 was compatible with stage of anatomical structure, which could be susceptible to bacterial infection.

A predisposing factor of patellar osteomyelitis in adult is reported to be trauma, which could induce fragility of bony structure, circulatory deficit from intraosseous hemorrhage and synovial bursitis of the knee joint at front. In general, osteomyelitis is more common in boys that their activity might be associated with higher chance of having trauma. In our case, she takes gymnastic class 5 days a week, which might be contributed to development of osteomyelitis from accumulation of minor blunt trauma. Moreover, she had acupuncture 2 days before she developed fever. In systematic review of complication reports following acupuncture, 19 cases of staphylococcal infections among 239 infectious complication were reported between 2000 and 2011 [10]. Most common reported infections were caused by mycobacterium (80.7%, 193/239). They included outbreak cases and possibility of reporting bias must be considered for interpretation. In our case, her physical activity and acupuncture might have been predisposing factors for developing osteomyelitis.

Although most of acute bacterial osteomyelitis in children can be treated with antibiotic therapy, she had persistent MSSA bacteremia and required surgical intervention for source control. Aggressive surgical management should be considered to avoid further tissue damage in the case of not responding to antibiotic clinically or microbiologically. Especially pediatric osteomyelitis could cause damage in growth plate, which might result in growth impairment of an affected bone.

In general, antibiotic treatment alone is sufficient for acute hematogenous osteomyelitis without complication. Surgical treatment is usually required for only selected cases with abscess or presence of sequestra. In our literature search, 35 papers were found. After excluding non-English literatures, adult cases and cases with mycobacteria and fungus, 18 pediatric patients were identified. Their brief background and the medical treatment content is displayed in Table 1. Interestingly, 17 out of 18 patients (94.4%) underwent surgical intervention. This percentage seems high, as the majority of acute septic osteomyelitis could be treated medically. Owing to the fact that the osteomyelitis of patella is rare, its challenge in diagnosis might have caused delayed medical intervention and progression of the illness. Moreover, a few reports were complicated with formation of fistula or abscess, which were resemble to our case [7,15]. As patellar bone is small in size, infection might be easier to expand the outside of patellar bone early in course, which might result in necessity of surgical treatment for source control.

We experienced a 9 year-old girl with patellar osteomyelitis caused by MSSA. Age of 5 to 12 year-old is at risk of patellar osteomyelitis by anatomical feature. It was difficult to differentiate from arthritis of knee joint but imaging study was helpful for diagnosis. The case review afterward indicated importance of physical findings which were absence of both circumference tenderness of knee joint and a floating patella. Also, there are cases that abscess causes the perforation of bone cortex. Our case and cases in literature suggested that patellar osteomyelitis often required surgical treatment in addition to antibiotic therapy.

No funding or sponsorship was received for this publication of this article. All named authors take responsibility for the integrity of the work as a whole, and have given final approval to the version to be published. We thank Mr. James Valera for editing the manuscript.

Informed consent was obtained from the patient for being included in this case report.